Ever wondered how to take photographs of the night sky? Learn from photographer Mo Thomson. 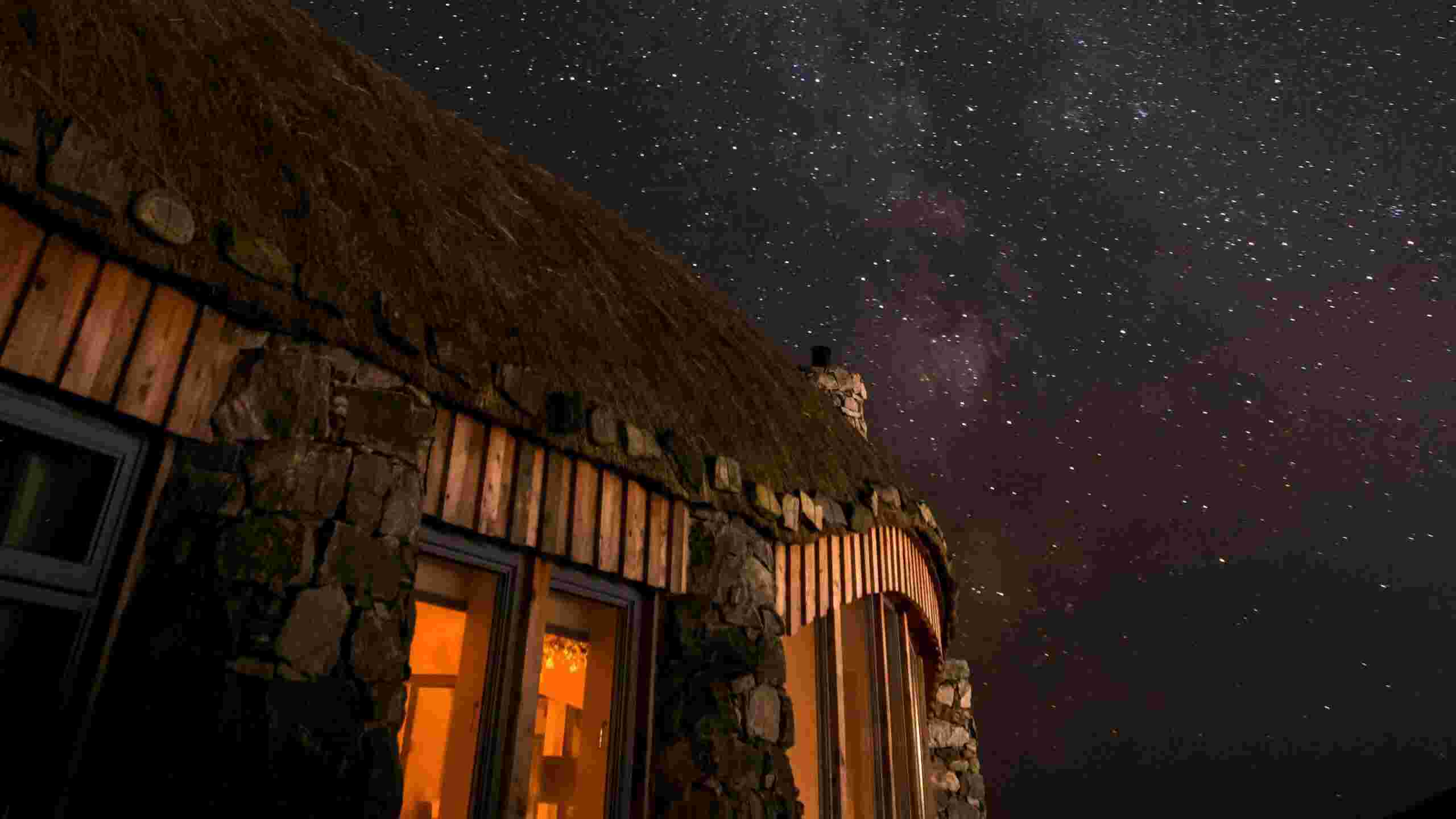 This article was written by Mo Thomson, a brilliant photographer who loves Harris and has stayed at Òran na Mara a number of times. We hope you enjoy learning a bit more about how to take photos of the night sky.

Well, that’s what I did with Nadin on her first trip to Harris and Lewis.

I heard a little gasp as she acknowledged thousands of stars twinkling away and the Milky Way arching overhead, it was a joyous sight.

It was the start of an amazing week on Harris and Lewis in March 2015.

We were joined by our friend Andy, an experienced pilot who was doing some aerial filming around the Hebrides.

We drove up to the west coast of Lewis to for a walk on Dailbeg beach and then watch the sun set at Callanish Standing Stones.

After sunset we headed over to Breasclete to meet up with our friend Donald, where we heard there was a good chance of seeing aurora in a few hours.

Around 9:30pm, Nadin, Andy, Donald and I started getting very excited when things kicked off, as colourful and intense vertical beams started appearing to the North. 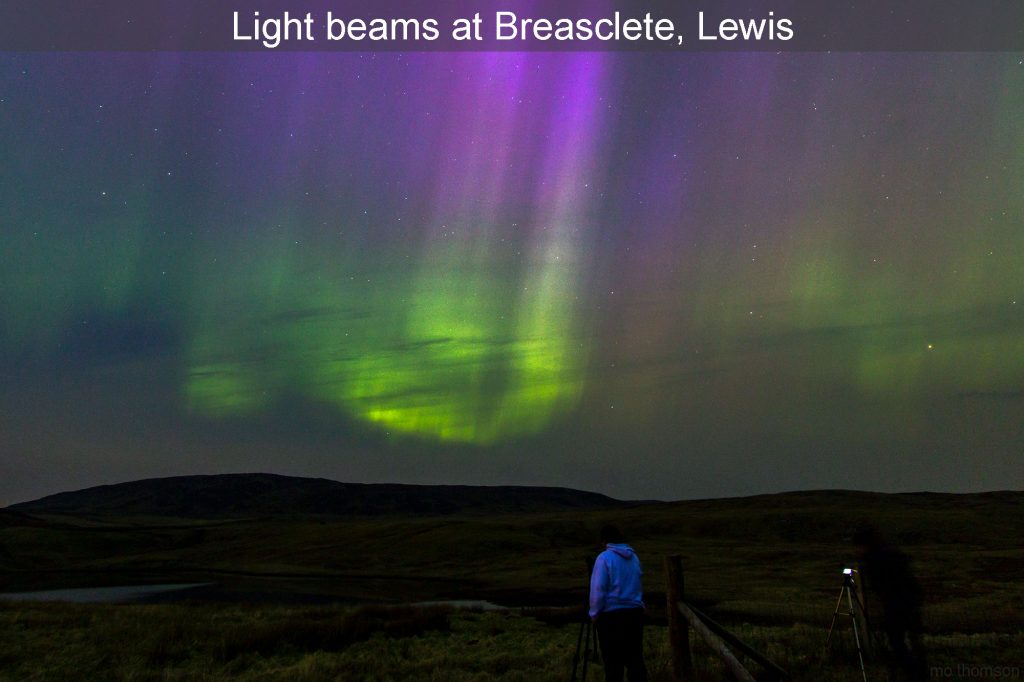 Looking straight up I even got to see an auroral corona, where the solar particles hit the atmosphere head on, it was mesmerising to watch the shapes and colours wriggle around above. 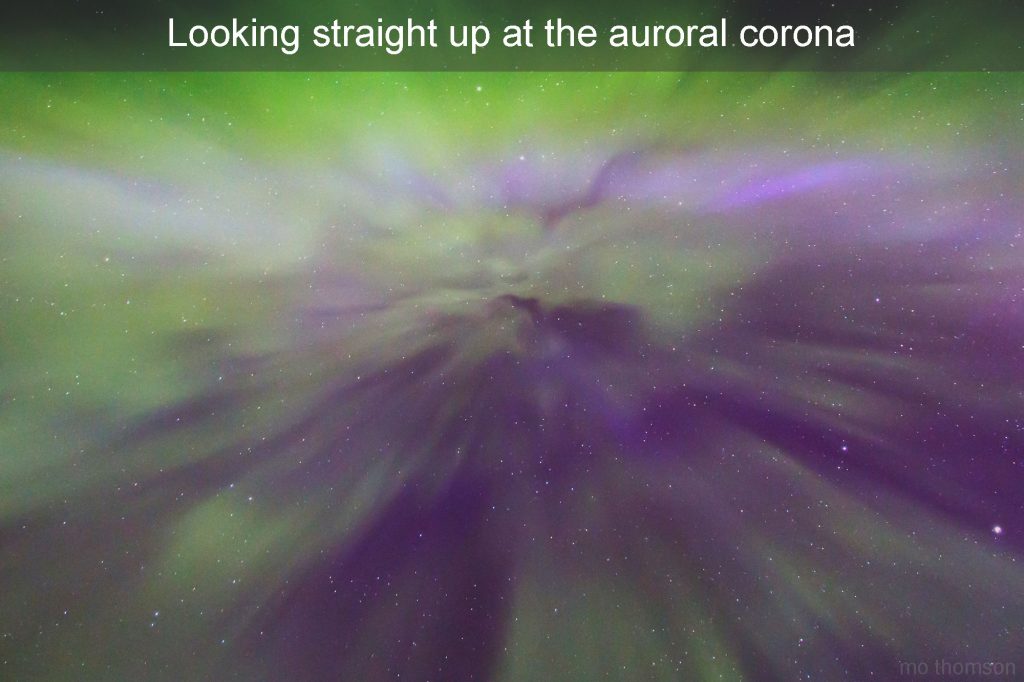 We made the short journey to the Callanish Standing Stones as the excitement continued to build.

There were six or seven of us there watching the light show above, including Emma from Callanish Digital Designs.

I got the camera gear out and started a time-lapse of the aurora dancing above the stones.

The aurora time-lapse from that night is in the Hebridean Dreams video. 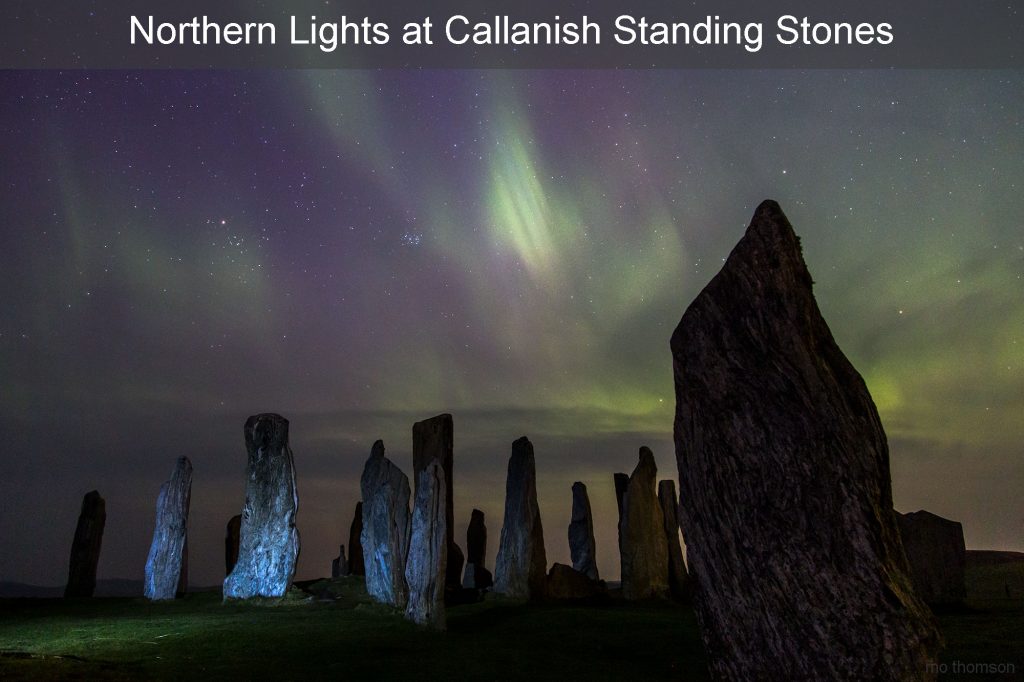 It clouded up around midnight, so we drove back to our accomodation on Harris, but I wasn’t finished yet.

I headed out to Northton at 3am with Nadin’s camera, just as the solar storm intensified for around 45 minutes.

Nadin’s camera had a brighter lens on it, which meant that I was able to capture more details with a shorter exposure. 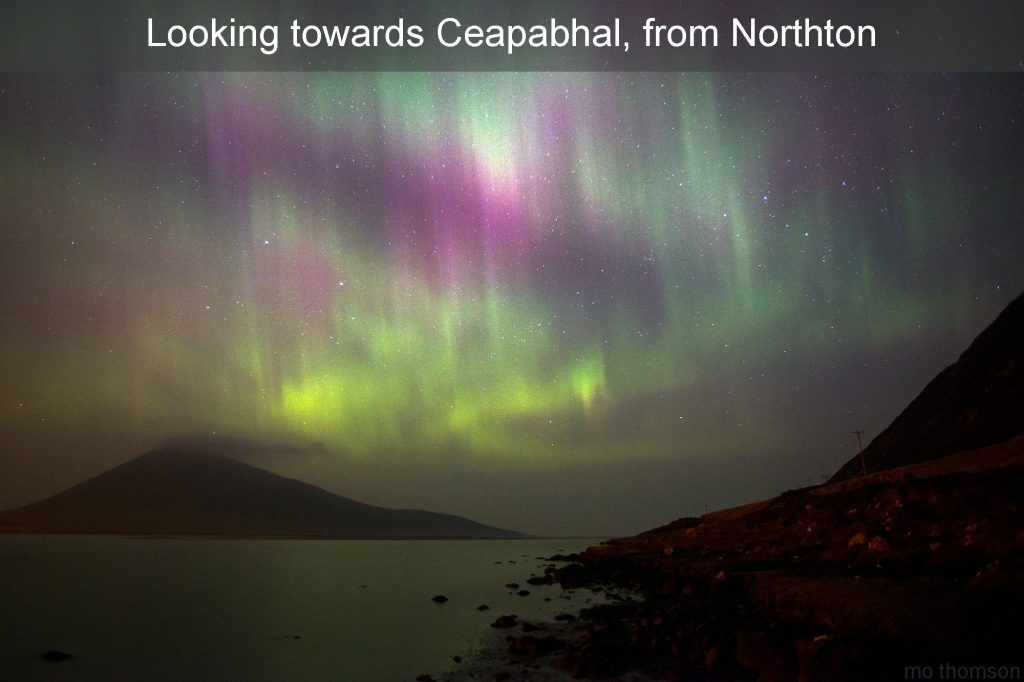 I eventually got to bed around 6am, very tired but very happy.

It was an amazing week and we were so fortunate with the conditions.

I wish it was always like that, but the intensity of the Northern Lights varies from faint green glows all the way up to intense storms.

Regardless of aurora activity, winter is one of my favourite times to go the Outer Hebrides, with dark skies, snow on the hills, big waves as well as more availability and reduced accommodation costs.

I regularly take trips to Harris and Lewis and have been lucky enough to stay in some fantastic luxury holiday homes.

On a 2016 visit to Oran Na Mara, we had lots of day trips to the beach during the day, but during the night I was always on the look out for the Northern Lights.

As Nadin and friends Colin and Sandra sat beside the log fire inside, I was out on the driveway watching out for aurora, even though it was mostly cloudy that night.

Gaps appeared in the clouds and I managed to get some photos from the driveway, before heading back in to warm up by the fire. 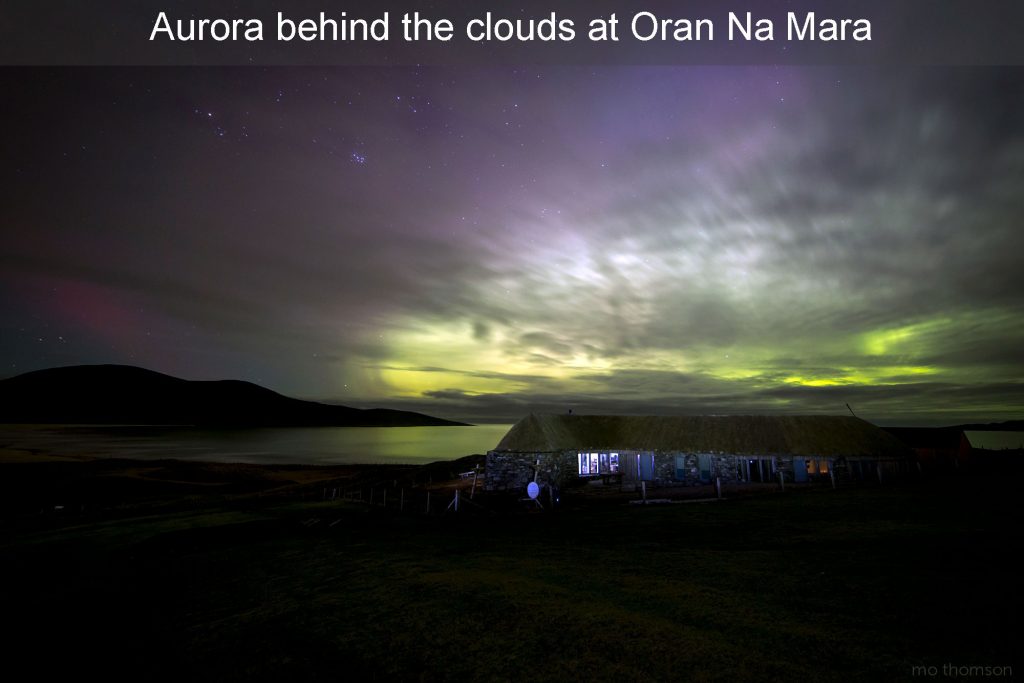 CHECK WHAT’S IN THE NIGHT SKY

The week around a new moon is best for taking aurora / dark sky photos.

Keep a look for our own galaxy, the Milky Way, it’s position varies throughout the year.

Check for space station flyovers, meteor showers and the position of the planets.

Full frame cameras with bigger sensors capture more light, but a smaller camera on a tripod will still be able to take some good images.

Always use a tripod for night time shots, use a shutter release or shutter timer to ensure the camera doesn’t move during the shot.

Get to know your camera buttons and tripod dials intimately, so that you can almost use them with your eyes closed when out in the dark.

Use a head torch, I recommend one with both a red and white light, red is better to let your eyes adjust to the dark, but a white torch is great for light painting and for walking safely.

Use live view to zoom into a single prominent star to get the best focus, you can temprarily increase the ISO whilst you check focus and then lower it when ready to take a shot for real.

Use as low an ISO as possible when taking the shot, as this gives most dynamic range / colour depth / least noise.

Shoot in RAW mode if available on your camera, as this gives much more flexibilty when editing photos later.

Use the 500 rule for astrophotography to minimise star trails.

It recommends that your maximum shutter speed is equal to 500 ÷ Equivalent Focal Length.

Be aware that human eyes don’t see colour as well at night time, our vision goes into a little bit of black and white mode when in the dark.

Camera sensors do pick up the aurora colour, so don’t be too disappointed if a faint aurora display isn’t vibrant to the eye when you see it, the camera will pick it up better.

Obviously the further North you are the better and keep away from places with street lights and car lights.

Use Google maps to check out potential locations before arriving onsite in the dark.

Solar storm activity on the sun vary over time, due to an eleven year solar activity cycle.

It was at minimum in 2020 and it will be increasing to maximum in 2025, which will result in even more opportunites over the coming years to catch some strong displays.

There are lots of apps and web sites to help increase your chances of being in the right place at the right time to see aurora.

Check the 3 day aurora forecast, it gives good indication of incoming solar activity, look for G1, G2 or if lucky G3 forecasts for the KP index.

Use the glendaleskye aurora web page to check current aurora conditions and sightings.

The CLEAROUTSIDE web page gives a good indication cloud forecasts for a specific location, here is an example for Tarbert in Harris.

Stay safe when out in the dark, mobile signals are unreliable in remote areas and a head torch will help getting around.

Be respectful to the locals, the landscape and any animals in the area, try and be quiet / discrete when out taking night time photos.

For more tips and info, click here for my TOP 10 TIPS FOR TAKING PHOTOS IN SCOTLAND

I hope this inspires you to get out and about at night if you are lucky enough to have some dark skies around, there is plenty to see up above. 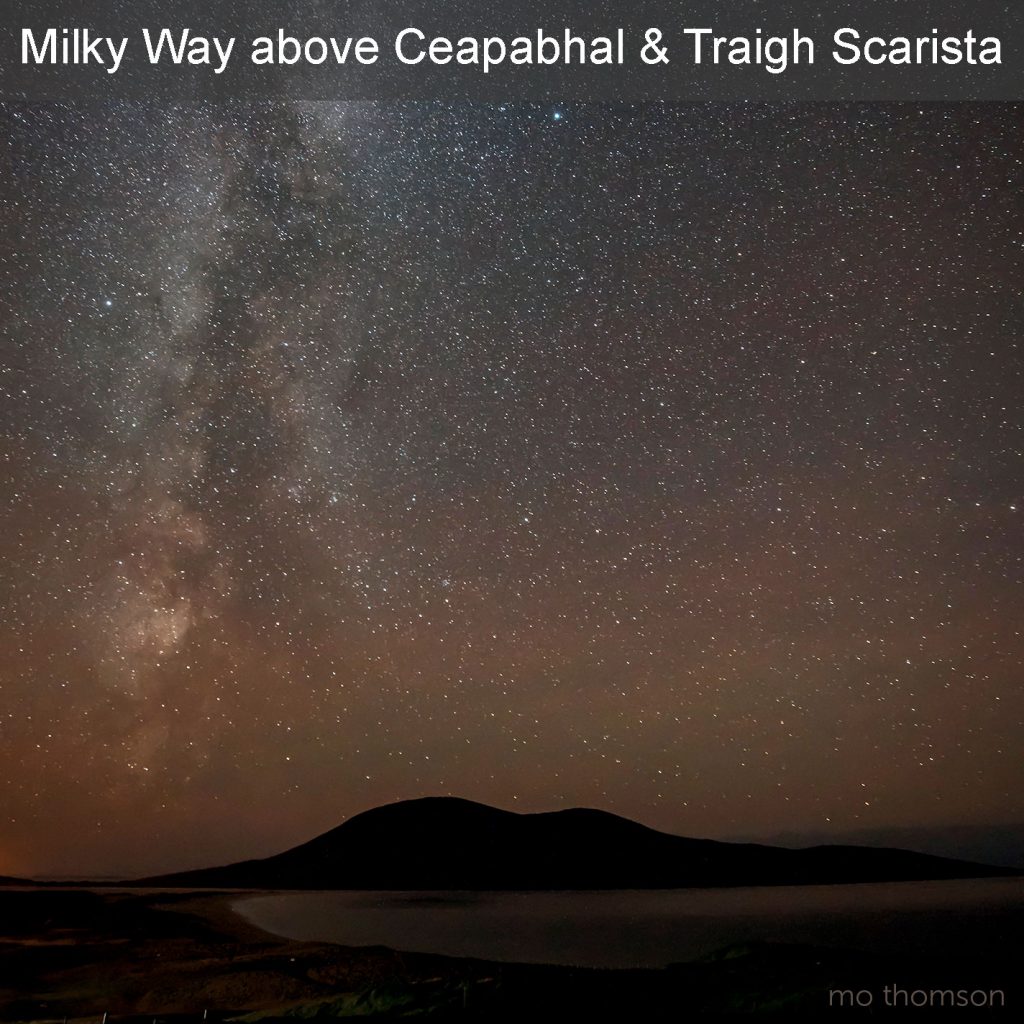